I hadn’t seen my best friend for months, so when she said she would be in the area and would be unexpectedly dropping by, I knew I wanted to make her a cake, as there is nothing that says I am really happy to see you more than a homemade cake. It would have been almost rude not to. It didn’t have to be complicated or involve a lot of elaborate icing, in fact I rarely make those sort of cakes, but needed to be tasty and delicious and have a nice moist centre, so apple crumble cake fitted the bill perfectly. It doesn’t take too long to make and to reduce the cooking time I made a number of small cakes rather than one large one.

There was a moment when I thought I would be left eating most of it myself when she turned down a sandwich on the basis of have eaten a big breakfast, but temptation won out as the cakes were spotted cooling on the rack in the kitchen. It seemed to go down well and after catching up on all the latest, she departed with a courgette plant and extra portions of cake.

400g cooking apples (this is about 2 large apples)

Cream the sugar and butter together, ideally using slightly softened butter. Mix in the eggs, one at a time, and add a little of the flour to stop it curdling. Fold in the flour and allspice.

Peel, core and dice the apples so the pieces are very small. Mix the apple and sultanas into the batter. At this stage it looks as if there is too much apple, but don’t worry, it all cooks down into a moist cake crumb.

Butter and line the cake cases. I used 10 small cake tins, mainly to reduce the cooking time, but this quantity would fit a 23cm round tin.

Spoon the mixture into the cake tins. Make the crumble by mixing the flour, butter and demerara sugar together, then slightly squeeze it in your hands so there are some nuggets of crumble and sprinkle on top of the cakes.

Bake at 160C in a fan oven for about 30 mins small cakes and about 1 hour for one large cake. 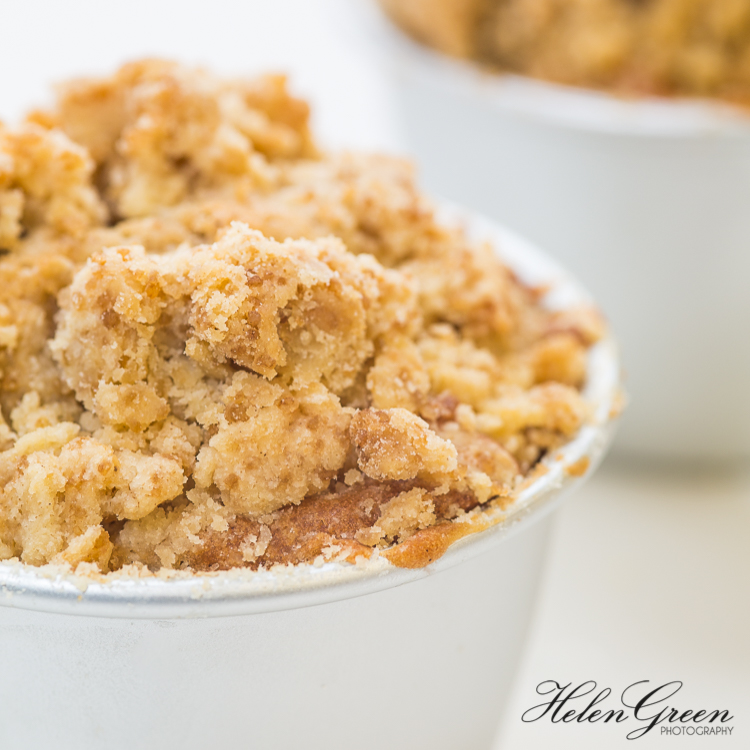 Yes, it’s a really nice moist cake and the crumble topping provides a welcome change in texture. I have made it before and I will definitely make it again. Maybe this is the definitive apple cake? See previous blog Scrumptious Apple and Honey Cake

2017-05-31
Previous Post: Ambrosial Caramelised Apple Prune Tart
Next Post: Why I love Blackcurrant Ice-cream (and you should too!)